I know you are thinking, why I give this title to this post ? But I have a very strong logic about this title . This week I were lived busy on Jainism concept , you can say I were read to jain philosopher Acharya Tulsi in this week by many cultural or art activities . We know  Jain Religion have a very simple philosophy for survive to real life . This religion have four base about a real life or character of Jain Community . But that Four Simple base points are  very tuff and hard for apply on life . Because Jainism  guide line is inspire  to jain Community for live and walk on one path,  then they can get to right mean of life about truth or peace of mind /heart/soul .

In  Bikaner A men was followed to Jainism In his life . he was not only followed after following to Jainism he was thinking on Jainism or that’s basic  points, yes late Great  Jain Guru Acharya Tulsi a great thinker of Jainism in contemporary  time . Acharya Tulsi was guided to all Jain Community for follow to indication of Jainism and time too . He said  you walk with  time . not back to time or not forward to time . he was accepted Jainism concept is a stander of life style  in society . Jainism concept is making to human, to a men . he was accepted  without communication , dialogue , discuss , life will not survive on this earth . He was accepted  time is moveable so it is very must we human accept to change of time and move with that change for peaceful life . He was accepted we all are same one family and  equal,  no one is up and no one is down. our life stander is same/ equal  on this earth . Actually Acharya Tulsi was read to nature or that’s importance in human life. So he was gave his philosophical thought to Jainism community .  His Thinking is not bound in only Jainism , his philosophy of life have a very big canvas I can see that big canvas, that  is our world .

Today Acharya Tulsi  is no more . but his  philosophy is living in many good  thinker and Jain families or Jain persons . I am not jain by Cast ,  but you can’t see any difference in me or a Jain  person , when  you talk to me on Jainism  concept . Because  it is in me by nature . where to it was came in me I can’t say, but it is in me . may be its god gift or blessing of God.

So I were attended  to Jainism concept  for a  week at Acharya Tulsi Shanti Pratishthan Naitikta ka Shakti Pith, Gangashahar ,  Bikaner .

Before this week I were invited at Acharya Tulsi Shanti Pratishthan Naitikta ka Shakti Pith, Gangashahar ,  Bikaner . There Journalist /writer/ Jainism Thinker / secretary  Sir Lunkaran Chhajer was asked to me , yogendra  we want to Highlight to this Shakti Pith so we need some idea from you , what we can do ? there he was gave me a photo- biography on Acharya Tulsi . that photography work was Photographer  Sir Raghu Rai India . when I were  visited that photo biography of Acharya Tulsi I said , this photography work is perfect medium for expose to philosophy of Acharya Tulsi . Actually he want to me some painting work at Place of SAMADHI Sthal . I did said “  it is not must what we paint, create or write about tulsi but it is very must what and how to people live to concept of tulsi . so create festivals , events and use to art and culture format in that live activity ” . This week  I were noticed to that discuss of us  in a live or practical form . Sir Lunkaran Chhajer was specially recalled to me  about this creative week on  tulsi in month April at Terapanth Bhawan  Bikaner.

You can notice just like me Sir Lunkaran Chhajer was focused on me continue , Because he was working  on  my idea from his high ideology . he want  to  revive to concept of Jainism with this live contemporary  time and in this time he was connected  to me because  I am thinking in contemporary time by way of  art.

Sir Lunkaran Chhajer is a very educative person of Jain Community , his Jain Community is trust on him because he is very simple, transparent , connecting person , progressive nature , right promoter , art lover and life care person . he is living to Jainism concept . he is dedicated , committed for Jainism . I can say Jainism concept is running  in his blood , he is thinking all time for promotion to right in Jain community or in Society .

Sir Lunkaran Chhajer have a very big canvas of network , that is not only online network  he have a very strong network of men to men, door to door . so today I think he is a Jain Guru for Jain community of Bikaner . he is not a Muni of Jainism but in family life or in social life  he is living as a GURU . A contemporary high tech Jain Guru( Teacher/master  ) .

This Week Sir lunkaran Chhajer was proved it from his all activity  at Acharya Tulsi Shanti Pratishthan naitikta ka Shakti Pith, Gangashahar ,  Bikaner . First  I were collected a invitation of Short Film Festival that was two days festival , I saw 75 short films on different subjects of life , I can say that all short film was connected to concept of Philosopher Acharya Tulsi . By a new medium jain community was learned some views of contemporary life . After film festival he was organized to conceptual Talk ( Vaicharik Anushthan ) on concept of Philosopher Acharya Tulsi .In that conceptual talk 12th writers of Bikaner  were expressed to Philosophy of Acharya Tulsi by their own views . After conceptual talk he was organized a free expression event ( BHAWANJALI ) emotion tribute to Acharya Tulsi by All Jainism person from Stage . there I saw many social  person of Jainism was expressed their emotions by  poems, song, dance  or short play , it was direct connection between philosophy of Tulsi or common men of Jainism community . After that Expression  event  I saw a very artistic event that was musical event many fresh singer was singing there religious song ( GEET ) for Jain GURU or about Acharya Tulsi . there I saw transparency  in selection or judging . they were  giving right promotion to right art energy . it was a right  work according concept of Philosopher Acharya Tulsi . sir Lunkaran Chhajer was doing that from his true soul.

He have used very experimental idea and he was brake up to some traditional format of Jainism for right image of Jainism at Present in this contemporary time  in our world . it is must .

In mid of this week  event Sir Lunkaran Chhajer was called to me on stage for a short speech . so I said visual art is a helping verb of religion or that’s religious activity , its example we have in our history . without  visuals art Jainism or Budhism could not got the right place in past society . so it is very must we adopt to visual art in this contemporary time,  without visual art religion will not move for long  time in vision of  social person.

In this week  continue  I were observing to Sir Lunkaran Chhajer and his all activity . he was not lived free for a one second ,  I did not saw  to him in sleep mode in this week . he was calling ,talking to everyone and listening to them or working for them . he was collecting donation from donors and promoting  to them from stage and gifted them momento’s . there I saw in him a one men army . His communication, connectivity , dialogue , motivation , were recalling to my mind about social network facebook or whatsaap . I saw in him a live social network facebook and whatsaap when he is working  in mid of his Jainism Community . there all were ready for his instruction for next work . he was not got angry on any body . I saw a complete natural smile on his face all time  because he was giving completeness of mind or  peace of heart from his high thinking work process  at Acharya Tulsi Shanti Pratishthan naitikta ka Shakti Pith, Gangashahar ,  Bikaner .

Today his  job is completing work  like our online network facebook and whatsaap it is true .  then  I am connecting  to nature of Sir Lunkaran chhajer  with online network  facebook or whatsaap .

Posted by yogendra kumar purohit at 2:32 AM 3 comments:


My Musical Sound is Order To Myself

Music it is a very easy medium of art/ communication/connect to society  . its work on sound webs . on our Earth all life’s or wild life’s   have a natural sound . that is live in them. Our body function is creating sound . but that is just voice, we can’t  say to that sound . The sound can get a right meaning when our vision is mixed with our voice . we can say our voice is a track  of our Inner sound .

Our inner sound have lots of mediums after our own voice for express to it. I have very first academic education of painting it is tool or track of  my inner sound . in childhood age when I were not student of Painting  that time I were performing to  my inner sound by music , I were playing CHANG ( a folk music instrument of Rajasthan ) . 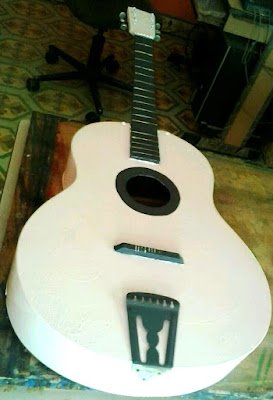 Today I am remembering this true past story of  my life. because in this days , my inner sound is promoting to me and demanding to me some musical track for my inner sound . so I were lived busy continue a couple of week  in work of update to musical instrument, The  guitar .

But in last week  my inner sound was wanted  to me track of music about  my inner sound . so I were started work on that 20 years old guitar . first I were setup to that’s all damaged wood part from  my hand and then I were recoverd to that’s band then  guitar was came in a right shape . After that  I were painted that  in white or gray color so that’s look was changed . after color work I were fixed original wire on  that guitar so guitar  was updated for musical tune . 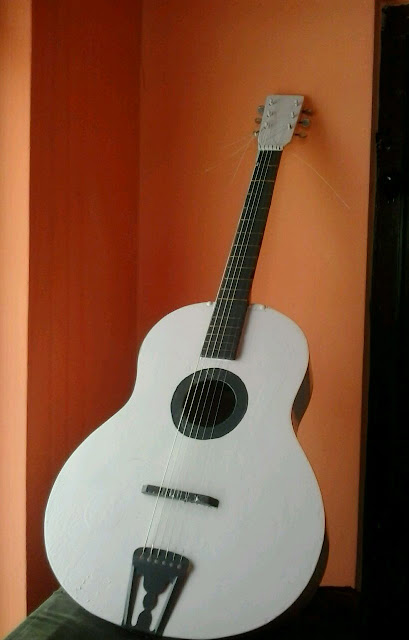 It was a live exercise for me I did work on a damaged guitar and after some art and craft work  that was came in natural  form for musical performance . I don’t know how to play to guitar but when  my figure touch to guitar wires that is create a good sound of  my inner sound , so  I were  feeling  nice and enjoyed to inner  motion in myself . May be after few days I can perform better from  my inner sound through that old fashion guitar . But at present I just follow to order of  my inner sound . so I could updated to guitar for my musical sound /vibration . it is sure new  beginning because when I were buy the wires of Guitar in same time I were buy a flute of bamboo stick , it was also a order of  my musical sound  so I did buy to a flute . on flute  I were also expressed to my Musical sound . that is  not perfect but flute music is showing to  my inner musical sound .

So here I said  My Musical sound is order to myself …


Posted by yogendra kumar purohit at 5:56 AM 3 comments: