After 5 year,  Today I am remembering to my
Critical Drawing

Cast format was designed in India at  time of VEDIK TIME ..In that time the kings were gave work to people on their working capacity for development of country or states . With time that cast format converted in different level of human  society . in past cast format was defined to work but today that cast format define to human . it is critical in our educated time of today ..but it is also a time design so what we can do with this critical time ? 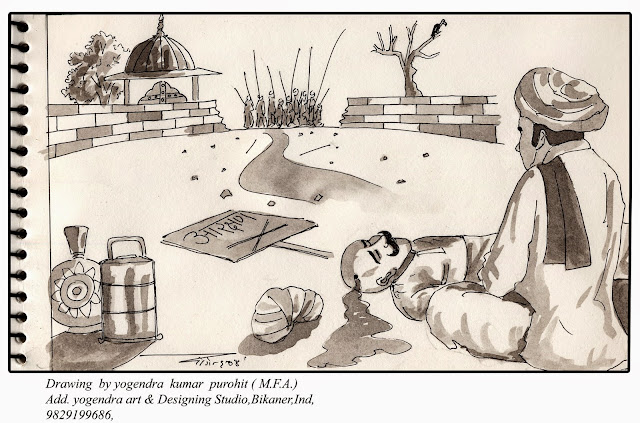 Someone have no idea how to clear to this cast format for our future so in confusion they are doing fight , strike and stop to work of government of INDIA . About  cast format fight I did saw lots of losses  of life , time , education , income and real progress of INDIA . But we INDIAN have no right way about this complicated cast format of today.

Cast format give chance to capable person and cast people are wanting reservation in work for their cast it is opposite but it is today in INDIA .

Education for design to mind but today mind is designing reservation in education ..ha ha. They are not making mind for better work they are making reservation for safe life by support of cast format. I don’t know when we Indian will come out to this critical cast format system or to cast reservation demand ?

In year 2008 my friend journalist Harish b Sharma Bikaner  was called me for a illustration work . he was wanted  to me a sketch on reservation fight of GURJAR ( CAST of cow boys ) strike . so as a art master I were observed to all strike matter and that’s impression on life then I were created  a illustration in monochrome  color .

I were shared that illustration with him and then on facebook too. I don’t know he was used that or not but I were saved that in  my art data  as a art work or as a documentation work of myself .

Today after five years I am again remembering to that same art work for same fight of cast format or that’s reservation fight . In five years the cast GURJAR could not found the right solution about their cast or that’s reservation . today they are again on in strike mode and in angry mood . Today they are blocking to national way, railway, and they are in mood of open fight to Government of RAJASTHAN or  INDIA .

It is critical , if last five years the GURJAR cast and the government of Rajasthan or INDIA was nor got any peace full salutation of this cast format problem .And today this problem once again creating problem for common man  in society of INDIA . it is unwanted tens but it is with nation.

This cast reservation fight is connect to Government or to GUJAR CAST but it is impact on all human cast of INDIA . other cast people’s are facing unwanted trouble and fear in their city and street , in this critical condition  someone are  losing to their life  , think when no life , then what we will do with cast format  in our dead life ..ha ha ?

This kind of think I were expressed  in my illustration work in year 2008  and today that same condition or that same subject is reopen for fight , strike or about cast reservation rights ..

Practice make man perfect .. this statement  is very fact for our perfection  in our life. Every day we practice for our better life or future from our self energy or vision . it is working  for us . we know it ,  so we are follow to this format about us  in our life , every day or day by day till last day of our life.

Life is run on our earth by energy and energy is coming in  us by food and food is coming for us from farmlands of our earth. So farmland is very must for our human life . today time is very critical some uneducated people are killing to farmland or they are converting to farmland in factory of mask production,  in that case we human are losing to our energy production field . they don’t know without energy of human  how to life will run on earth with other products ? it is a big question to our human family by me . are  you agree with me or not ?

The farmer blood in  my body because I am belonging to a very historical farming family ( MAD KOTADI PUROHIT Family ) late great father Shri Shivratan Purohit ji  of  my late great grandfather Shri Bulaki Das Purohit ji was designing  farmer’s   in his village MAD ( energy creator machine about life ) from his farming experience . He was gave exercise to juniors and his juniors were got a right farming education from him for next step of life . so I can say his blood is in me because I am grandson of him .i can say for him, he was dictionary of farming language .ha ha

You know last three years to continue I am busy in exercise of farming project work  . I am saying to that natural painting in  my art language  . The farm is in  my view a big canvas and every year I am improving to that canvas surface for better energy production by work of farming . In that case I am caring to clay of our farm land. In last post of this subject on art vibration I shared how to I were cared the clay of our farm land , I were filled  clay in plastic bags and put on boundary of our farm land for stop to clay cutting by rain water. That was exercise by me on action format of army action. In that work  I were used my education of Air wing NCC training.

Last week I were done one more exercise for  my big canvas and I filled clay in some deep holes of farm land and yesterday I were implemented a new creative idea or I did exercised for care to our farm land clay . that was 15 hours hard exercise by me,  there I were director , idea creator and labor too . For that exercise I were used very cheap medium for low cost about  my pocket , that was not academic idea for farm land care exercise ,   but I were taken risk because I am confident on medium work . yes i were selected plastic net that is light and strong that’s net holes is very small so water can pass but farm clay will stop on boundary  side when rain will come .

I were filled 400 fits farmland boundary side by our farm clay ,so this kind of exercise is very must for care to clay and money too .in visuals  you will see how to in 15 hours exercise I were completed to work of care to farmland clay by a new exercise of creative idea .

After that hard work  and new exercise today I am confident about farm land clay . the clay will set in farmland and then there to we can produce to more energy about life in form of food corn .

So I said to it a new exercise …

Posted by yogendra kumar purohit at 7:15 AM No comments:


Six Lakh Thanks to Google + 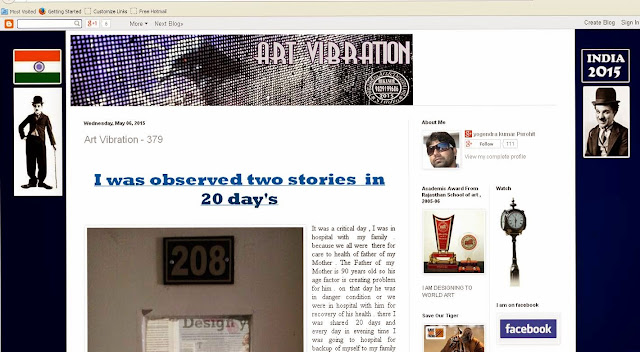 Thanks is a very big word of our human society. We educate people are giving thanks to our best supporter of life in every day . first we are thankful for our God , because god was designed this life for us  on our earth  or on our earth the senior’s were designed human society and culture  for better life on earth so we are also thankful for our seniors in our life . our society and culture was gave us respect and supporting culture or the word thanks for better helpers  and supporters  .

Thanks is a single  word but its impression or feeling is very big , a one thanks can give  you all kind of payment for  your good help or support . in  my school education time I were read in book of Hindi lesson , a chapter about thanks . that lesson was on subject of real income of life .. yes that income is thanks . the writer of that chapter was wrote when we hire a auto for our station after that we pay rent of that auto to auto driver but that rental cost is not a real income of that auto driver or we are not pay the real payment to him in money format . Actually our feeling full thanks is the real income of that auto driver . we can pay the real payment to him by our thanks and our thanks is his real income after collect the rent of his auto .
So today that lesson of  my Hindi book is recalling to me for give a real payment to google +  by my feeling full thanks  .

You know in year 2007 I were connected to google online network that time I were created a E mail on gmail . after that I were created  my own blog art vibration in year 2008 that was also online space for  myself art expression through google blogger . 2007 to till 2015  I am continue  with google and google with me , in this online art communication  I were shared  lots of about  myself art journey , and google network was promoted  that and today my art promotion work is on by google .

Google Gmail. Google blogger and google +  online network are always with me and today by this networks six lakh’s  art lovers ,art promoters, art critics, art galleries, art museums, art magazines , art medias , art social networks and artists of our world family have visited and read to me and myself  art journey . it can possible by strong support of google networks on online.

I can say google team have been gave me a real identity in our world art family as a creative art master from INDIA . they are paying me free space for  my art expression and I am paying to them  my recent art update with creative idea or art works .  I am using the space of google for right communication about art and culture . so this art action of  myself is giving some presence in role of educative work by google . you can say from art side I am member of google team and they are team member of myself art journey. Because they are providing to me some right space for right art communication  of myself art matter to our world art family .

2008 to till 2015  on google or on google + six lakh’s art viewers have visited and reading to  my art update article  and art stories . it is a magical result for my art journey or it can possible  by team of google  so I have a very special feeling for google team , I want to pay to google team in form of thanks  ..but not only one thanks . that  thanks is in six lakhs  form’s from  my heart for google team , google blogger or google + .
So here I said six lakh to google +

Posted by yogendra kumar purohit at 11:26 AM No comments: