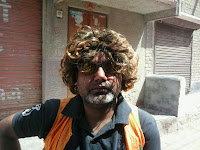 Friends yesterday we did celebrated world theater day . I were collected many wishes and I were wished to many friends of theater  art family  through  online network . when I were wishing  the wish of theater  day in that time I were remembering to  our  Holi festival of Bikaner . In Bikaner or on holi  many people are getting in self a theater artist and he perform at street of Bikaner . By luck a silent performer  / theater artist in me by my city culture or by  my art education too.


About My City Holi , I have shared  many time  on this art vibration  in past posts . but this post is very special  because I am connecting  it to world theater day or theater art . Before Holi  I were  went to main city for visit to  Holy culture sound and that’s live activity . in that case I saw a shop keeper was selling  some prop’s  about festival of Holy that was colorful CAPS , PICHKARI , KEY CHAIN, MASKS , WIG’S , FUN DESSES and much more  but interesting  talk was ,  that  shop keeper was also in get up of a PATHAN and his helper was in get up of  SEA CAPTAIN.  They both were  looking very funny and they were  creating fun for common persons  in that market . there to I were buy a Wig for  my Holi look .

That Wig was in golden color , that’s hair was long and that’s look was  looking like hair of cricketer Malinga ( Shrilankan Player ) . First I were done a serve on whatsaap before buy to that Wig .My  all friends  were told to me looking good bro in golden hair . so I were buy that wig for myself fun of  holi .

Next day  my city people ( fun creator ‘s ) had  organized to FAAGANIYA FOOTBALL match , so I were went there with  my new look or getup. There kids and many fun liker called me HAY MALINGA  so I got name of  my new fun look MALINGA , there in football team , I were registered  my name MALINGA for team of Male , there I were presented with  my own foot ball that was in  my hand .

I saw many kids were smiling after look to me and many young boy’s were soot me with his selfie in that foodball ground by their mobiles . Friend Himanshu Vyas ( Bikaner ) he was shared  his selfie with me on  my facebook so I  am give  first place to his selfie on this art vibration title image.. he was enjoyed to my look and  my play style , because many time I were picked to football in  my hand and run for goal  side , that time many kids and boy’s were laughed very much .ha ha ha .. because I did showed I am fast bawler  so its  my duty I take ball in  my hand and run for out to bats man ..ha ha by luck ball size was big ..ha ha it was fun motion and I were playing football or in football I played cricket for real fun about my  viewers ..

Our City D.I. G. ( Police ) was presented there as a chief guest and after finish that fun game he was gave very funny award *** the toy car *** to all player’s  of that live fun  Full game of Bikaner ( FAAGANIYAFOOTBALL 2016 – FOLK  ) .


I was Team Member of our Bikaner theater festival

For Bikaner,  this festival was very special because the Founder member of JUNUN theater unit Sanjna kapoor was in Bikaner theater festival . she was participated  in all activity of theater festival as a expert of theater art. She did talk on theater or that’s problems in small cities of India .

In three days we were invited to many theater artists of our INDIA . in this festival the team of MUMBAI , GOA, CHANDIGARH ,BHOPALand BIKANER  were  performed to play on stage . that all play was very artistic and meaning full for viewers of that festival .

There in three talk session was run  in morning time of festival days  ..in first day first talk of * theater or criticism * sir Devendra Ankur Theater artist  was sit in that session and he gave answer to all questioner of that session , I did asked to him  when a play can’t communicate rightly with viewers in that condition viewers are feeling boring to play  this boring condition is not a criticism or it is  ?  but by luck I could not found a right answer from stage ..


Second day I were joined again the next talk session about * actor  or acting *  .. in that session Sanjna Kapoor was asked question to all. She asked what  you need to play for  yourself visit ..in that session I were put up  my view in front side of Sanjna Kapoor , I told  why play is not design the character of social person in present ? she was noticed my view ..

You can say this post is   my final touch to promotion to our Bikaner theater festival 2016  by this art vibration and I am completed   my commitment as a  member of Organizer comity .