Rajasthani language, literature and cultural academy was
Approved to my art work

Friends few months ago  a  writer Mr. Manish kumar Joshi was came at  my studio and he was demanded  to me a visual art help for his next book,  a child novel CHANDAN . that book was in Rajasthani language and writer Manish kumar Joshi was wanted  to me a title cover and some illustrations  for his Rajasthani child novel . I were said yes to him ,  in my very packed time of creation because I can’t say no for creative work to any one when someone need to me help of art. It is in my art nature .

About this work I were shared a post on this  art vibration blog . but that time child novel Chandan was not published .but that was ready for composing or publication so in short time I were created  eight illustrations  and one title for that child novel CHADAN.

On Sunday , in morning time writer Mr. Manish Kumar Joshi was came in my studio and he was gave me a copy of child literature Novel Chandan  .  I were saw to that published child novel in hard copy . that was came by good printing  from Sankhlaa printers  Bikaner and Munaa publication Bikaner  was composed and published  to that Rajasthani child novel Chandan .they have mansion my name as a  title designer .Rajasthani language, literature and cultural academy was donated money for publication of  Chandan Novel  about promotion to Rajasthani language .( I were created title and illustration without any charge )  I am happy after done this creative job for our language promotion or for promotion of a child literature ( but in my critical view child literature is come out by child writing . when a mature writer is writing for child in that case his or her literature is get a child character design by  literature format  or as a educational format by literature form  ,so  that is not child literature in fact ) . 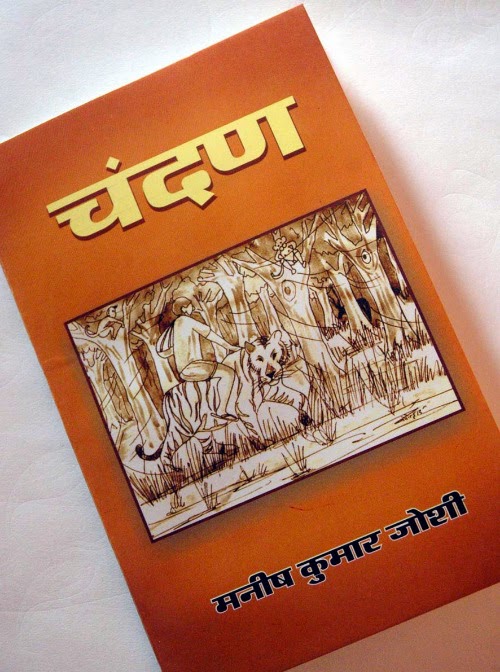 But a good think is Hindi readers  can read very easily to Rajsthani by text of HINDI . it is a plus point for Rajasthani language promotion by book publication format .

By this art And illustration work,  I have contributed   my art energy in academic work of GOVT .of Rajasthan about language promotion or that’s education in society .

So here I Rajasthani language, literature and cultural academy was  Approved to my art work..

Posted by yogendra kumar purohit at 5:28 AM

Great...i like these illustrations !
Sharing knowledge, skills and talents to children and make joy to them, is the most beautiful work !